When I rented my house, my landlord asked, in exchange for a reduction in rent, would I feed the stray cat who lived under the deck.  Of course, I agreed.  I established a regular routine of 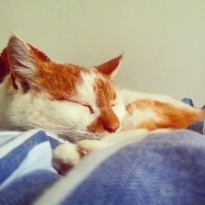 placing a bowl of food outside, and cat seemed satisfied.  One rainy night, like something out of an ASPCA commercial, complete with Sarah McLachlan
serenading in the background, he sat outside the back door, meowing to be let in.  Oh, he layed it on thick, enough that I was compelled to allow him into the house, and into our lives.

He’s a vocal cat, a tiny little dictator of sorts, which inspired us to name him Chairman Meow.  He comes and goes as he pleases, and there are times I’d hear him scribbling, but I never paid much attention to it.  Turns out, he’s kept a diary of his daily comings and goings. (What? He left it open on the kitchen floor.  Was I just supposed to NOT look at it?  Of course I did.) Apparently, the good Chairman has much on his little mind.

An excerpt from his journal…

Infiltrated the nest.  God, humans are easy.  A handful of meows and a slight tilt in my head to let the few drops of rain run down my nose and they are putty in my paws.  Targeting tiny, boy human.  Food status: mediocre but consistent.

Lady human loves me. Of course she does…I’m adorable. She thinks it’s a hoot when I meow after she talks, so, I’ll just go with that and see how far it gets me.

So, today, lady human was talking to me in this crazy, idiotic, high pitched voice, when she produced this tiny, metallic bag.  She shook it, still talking to me about some nonsense.  No, lady…no idea what the fuck is in the bag.  Why don’t you show me.  Then she sprinkled something on the floor that looked like food, but OMG, they’re SO good.  Good enough to endure her shrieking?  Jury is still out.

It’s been a while since my last entry for a few reasons.  First, I decided to explore a bit.  Found boy human’s sleeping space, and damn if it isn’t comfortable.  And, unlike the lady human and girl human, he’s quiet.  And still.  Nice place to nap.  I tried letting someone know I needed to get the hell out of dodge this morning, but my meows fell on deaf ears. Taking a shit on a pile of clothes left on the bathroom floor seemed to get their attention.  It also got me banished from the house temporarily.  Note to self, don’t shit on their stuff.  Humans don’t like that.  Meh, whatever.

Dude.  Cat Nip bender and I lost a few days.  No idea what happened.  All blank, except for waking up on my side and feeling the urge to kick the crap out of whatever was touching my feet.  That’s all I remember.